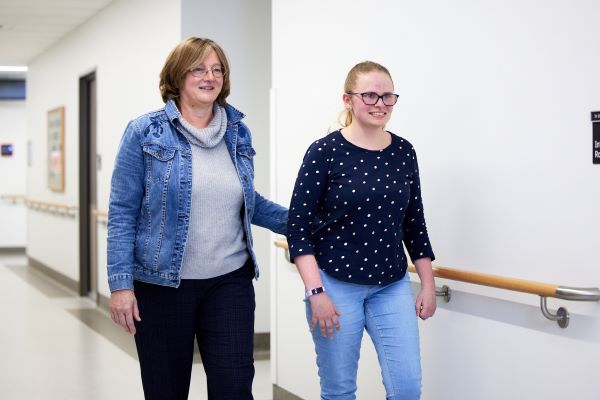 Motor neurone disease (MND) causes a range of symptoms and you may be diagnosed with a type of MND depending on the ways your symptoms present. The term MND is used as an umbrella term to help describe the different types, or the “family of motor neurone diseases”.

The differences are mainly to do with what parts of the body are affected, and how the disease progresses. The four main types are described below. Each type is not a completely different disease but rather a different form.

Over time, as symptoms and the rate at which they progress becomes clearer, your diagnosis may be reviewed and changed to another type.

What all kinds of MND have in common is that they damage the nerve cells in the brain and spinal cord, known as motor neurones or motor nerve cells.

In MND, these nerves weaken and start to die, which means messages from the brain to the muscles can no longer get through. Gradually, with lack of use, muscles get weaker and waste away.

How quickly MND progresses is very individual and can vary from one person to another.

Please be aware the information below includes details about life expectancy, so read when you feel ready to do so. Life expectancy can vary depending on the type of MND and the way it affects you.

Determining the type of MND you have can take some time as there is no one test for MND and it can be difficult to diagnose. A neurologist will look at your symptoms for clues in figuring out which neurones are involved. It takes time to figure out the type of MND because it’s a complex disease, and it requires careful observation and testing of symptoms.

ALS is the most common form of MND and affects both upper and lower motor neurones. ALS is characterised by muscle weakness and stiffness and over-active reflexes. Usually, ALS leads to:

Like ALS, PBP affects both upper and lower motor neurones but usually affects speech and swallowing muscles first. PBP often presents as slurring of speech or difficulty swallowing. Over time, PBP spreads to affect other muscle groups in the body, such as the arms and legs. PBP is life limiting and expectancy is between six months and three years from onset of symptoms.

To learn more look at What is bulbar ALS? from the ALS Society of Canada.

In PMA lower motor neurones only are affected and typically individuals with PMA have a slower rate of progression.
PMA may begin in the arms (flail arm type) or the legs (flail leg type).

PMA can be difficult to diagnose. Recent studies suggest that many people diagnosed with PMA subsequently develop issues with upper motor neurones. This would lead to a reclassification to ALS.

PMA is life limiting but life expectancy is usually more than five years.

PLS is very rare and affects only the upper motor neurones. PLS can present in similar ways to other types of MND. Initial symptoms of PLS can vary, but may include problems with balance, stiffness and weakness of muscles, particularly in the legs, slurring of speech, muscle spasms and cramps.

PLS progresses slowly and life expectancy can be 10-20 years or more.

To learn more look at Primary lateral sclerosis from the MND Association of England, Wales and Northern Ireland.

A small proportion (5-15%) of people with MND will receive a diagnosis of ‘motor neurone disease with frontotemporal dementia’ or MND/FTD.

Often the symptoms of dementia precede the motor symptoms, sometimes by a number of years.

Dementia is not one specific disease, but refers to a collection of symptoms that are caused by disorders affecting the brain. Dementia affects thoughts, behaviour and the ability to do everyday activities.

Learn more about cognitive and behaviour change in MND

Kennedy’s Disease is a rare kind of inherited disease that affects the upper motor neurones in the brain. It is not a type of MND but has similar symptoms.

The disease causes the muscles of the face and limbs to become weaker and waste away. Other major Kennedy’s disease symptoms include enlargement of breasts, muscle cramps and spasms, hand tremors, impotence, and speech and swallowing difficulties.

Age of onset is usually between 35 and 40 years and men are mostly affected. The symptoms can be managed and the disease is not usually life limiting, but there is no cure.