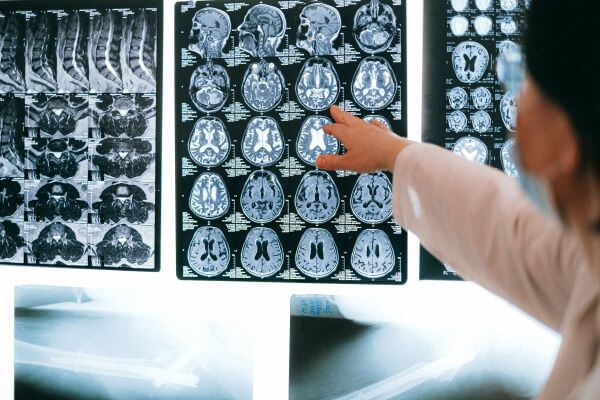 This blog has been written by Rebecca Stevenson, an MND researcher studying for her PhD at the School of Medicine, Western Sydney University.

What is a biomarker?

A biomarker allows scientists and doctors to measure what is going on in a cell or a living organism at a particular point in time. Specifically, a biomarker (short for biological marker) is an objective medical sign used to detect or measure the presence or progress of a disease.

This is different to symptoms, which are signs reported by a patient. For example, blood pressure is a well-known biomarker used to indicate the risk of stroke.

Biomarkers include a huge range of measurements from body temperature, to detecting disease associated proteins in the blood or changes on magnetic resonance imaging (MRI) scans. A biomarker is a very useful diagnostic tool that can alert a patient of disease before symptoms set in and changes in biomarkers can help clinicians track disease progression.

How do we develop biomarkers?

Biomarkers are often developed and refined in clinical trials, before being approved by governing bodies, such as the FDA in the US or the TGA in Australia. Reliable and effective biomarkers have the potential to be used widely in clinical settings. A good biomarker must be:

Biomarkers need to be safe, reliable and reasonable to carry out. For example, the only way to diagnose mad-cow disease in humans is to test a sample of brain tissue. Clearly, this is not a viable option as a biomarker in living humans. This is why things like blood tests and brain scans using MRI are popular choices to screen for biomarkers, as they are readily available and non-invasive.

Several biomarkers exist for neurodegenerative diseases. For example, MRI scans of the brain can be used to track the deterioration of neurons in the brain (neurodegeneration). The MRI will calculate the volume of certain brain areas which, if reduced in volume and grey matter, will indicate the level of neurodegeneration.

In Parkinson’s disease, the presence of a protein called a-synuclein in cerebrospinal fluid can be used as a biomarker. However, a-synuclein is not always reliable as a biomarker, as people with other neurodegenerative diseases can test positive for this protein.1

Similarly, Amyloid-beta (Aβ) is a protein associated with Alzheimer’s disease. Studies show this protein can accumulate as early as 20 years before symptoms appear.2 Aβ is detected in the brain using PET (position emission tomography) and its use as a biomarker has led to positive changes in the treatment and management of dementia patients.3 Aβ and another Alzheimer’s-associated protein – Tau – can be detected in cerebrospinal fluid (which cushions the brain) and blood plasma. Detection of Tau in blood plasma can be helpful as it can distinguish between patients with Alzheimer-related dementia from those with other neurodegenerative diseases.4

Biomarkers go beyond simply providing patients with diagnostic information, they also give patients the opportunity to join clinical trials, playing a crucial role in drug development. Both early and late phase clinical trials are increasingly taking advantage of biomarkers to identify populations, monitor therapeutic response and screen for side-effects of potential new drugs. All these factors can help to make trials more efficient which reduces the time to get drugs to market.

Despite a large amount of MND research, only a handful of potential biomarkers for the condition have emerged. At present, there is no single test to diagnose the disease, rather other conditions must be excluded. MND patients normally wait 12 months between the appearance of symptoms and a diagnosis5. This, combined with the rapid progression of symptoms, means finding new biomarkers for MND is vital.

Presently, the process of MND is tracked using the ALS Functional Rating Scale (ALSFRS). As MND symptoms progress due to the degeneration of neurons in the brain, researchers are trying to find a biomarker in the blood, urine or CSF which will track neurodegeneration more directly than the ALSFRS.

Within MND, biomarkers have helped to classify people by their specific MND-related genetic mutation. This assists in improving clinical trial designs. One such example was a trial examining the effect of lithium on MND symptoms. This trial identified that those who carried the specific UNC13A mutation experienced different effects of lithium therapy compared to other mutations, even though overall the trial had a negative result. The study reported that individuals who carried the UNC13A mutation had a significantly higher survival rate at 12 months compared to those who received the placebo.6

Biomarker research in MND has led to the identification of the protein p75 ECD in urine, demonstrating people with MND show significantly higher levels compared to those without MND8. This biomarker showed promise in the preliminary stages and is currently undergoing further research.

Signs of inflammation such as the C-reactive protein (CRP) can also be used to identify disease. Studies show people with MND have increased CRP in the blood and this is being investigated as a biomarker for inflammation. However, as inflammation is present in many other conditions, CRP may not be a reliable biomarker for MND.

Oxidative stress is an imbalance of free radicals and antioxidants in the body, which can lead to cell and tissue damage. High levels of oxidative stress are associated with MND, in fact, the drug Edaravone which was recently approved for use in the USA and Japan targets oxidative stress in MND. As such, oxidative stress biomarkers are currently being researched in cerebrospinal fluid, urine and blood.

Measuring changes in the electrical activity of muscles affected in MND can tell us if the nerves controlling the muscles are damaged. This is usually carried out using electromyography (EMG) which involves a small needle being inserted directly into the muscles and the electrical activity is recorded. However, this can be invasive and painful for patients. The fundamental goal is to find a biomarker which could detect and track MND with a simple and easy test. However, the best approach we have at present is a combination of the currently available biomarkers and ruling out other conditions.

The future of biomarkers

Some biomarkers such as blood tests and MRI imaging are relatively easy to administer and non-invasive. Others, such as cerebrospinal fluid and EMG can be invasive and painful for the patient. A balance must be found between accuracy and burden on patients. As we develop new and more sensitive technology, new biomarkers and patient tests will emerge.

One likely candidate is a large longitudinal study currently underway in the UK9. This study aims to test novel biomarkers to evaluate prognosis and treatment responses in people with MND and may lead to the discovery of new biomarkers.

Future biomarkers may allow us to develop personalised medicines. For example, genomic biomarkers may help to identify different subtypes of disease which will help clinicians to recommend the best-suited therapy for the individual.

Biomarkers enable us to better understand diseases like MND and may in the future allow us to detect and intervene before symptoms begin. Even though MND currently has no cure, the earlier we catch the disease the better the outcome for people diagnosed with the disease. The ultimate goal is to develop a biomarker which will allow clinicians to intervene before irreversible damage is done.

Rebecca is a third-year PhD student in The School of Medicine at Western Sydney University. Her PhD research focuses on the degeneration of motor neurons in Amyotrophic Lateral Sclerosis. In her spare time, she enjoys rock climbing, yoga and swimming.